I took 36 hours to do whatever I wanted this past weekend. No schedules, no meetings and some rough plans; it was liberating, to say the least. I haven’t taken that time for myself in a long time, and got to see some of the most beautiful places in the Pennsylvania woods because of it.

Our first stop landed us in Jersey Shore, PA in hopes of finding an overlook to see Pine Creek Gorge, or – the PA Grand Canyon. This was on the way to Ricketts Glen with no out-of-the-way driving time. The south end of the gorge is situated right along this town, and after a few miles of envying the river-tubers, we realized we were taking a long road through the gorge and there was no overlook in the southern area. So, after a quick stop for lunch pointing and picking from signage (no Urbanspoon or Yelp reviews were used), we picked up and drove an hour north to one of the more popular overlook destinations – Leonard Harrison State Park. It was so beautiful – I can’t even imagine this place in the fall.

After this short, out-of-the-way visit (worth it), we set off to Ricketts Glen State Park, tacking another hour onto our detour. It took us 6 hours to get there, but it was, quite simply, awesome. Settling in as car-campers, the trunk of the Kia was full. We were by no means minimalists, and I don’t think I ever will be.

Up at 6 am the next morning, we started the hike an hour later and took the easy Bear Walk Trail from Beach Lot 2 to Lake Rose Trailhead Parking, starting the Falls Trail over a mile into our hike with the 37-foot Mowhawk waterfall. We didn’t know what to expect, but the entire thing glorious, and one of the more frightening trails I’ve taken at this point (it really wasn’t that bad). The waterfalls came like waves once you saw the first one; you would walk out of earshot of the one behind you and begin to hear the rush of the next – and then you’d see a cliff in front of you. It was your next challenge to concentrate on climbing down and not be so excited that you’re shrieking like a girl in the middle of the woods… there was a reason we set out early enough that people wouldn’t be on the trail for our first few views, haha! 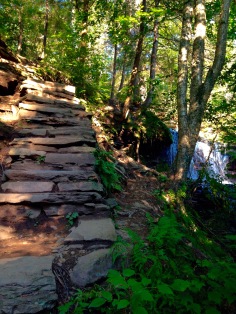 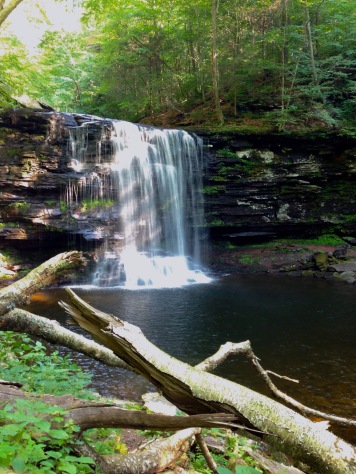 The trip as a whole was nothing short of amazing. I can’t wait to go on the next 36 or 48 hour trip with no time limits. The Mid-Atlantc is my oyster.

3 thoughts on “36 Hours in the Woods: Ricketts Glen”

ChristinaSkis Blog, 2021 © Unauthorized use or duplication of this material without express permission from this blog’s author is strictly prohibited. Excerpts may be used, provided that full and clear credit is given to ChristinaSkis.com with appropriate and specific direction to the original content.